Elias Howe, who invented the sewing machine, also invented the ‘Automatic, Continuous Clothing Closure’, which was patented in 1851. But it was Whitcomb Judson from Chicago who first marketed the ‘Clasp Locker’, which was patented on August 29, 1893. Together with businessman Lewis Walker, Whitcomb launched the Universal Fastener Company to manufacture the new device. In 1913, Swedish immigrant and electrical engineer, Gideon Sundback, who worked at the Universal Fastener Company produced a better model, the ’Separable Fastener.’ It was patented in 1917 and is what we know today as the modern zipper. He increased the number of fastening elements, had two facing-rows of teeth that pulled into a single piece by the slider and increased the opening for the teeth guided by the slider. Until this point, they were called hookless fasteners. B.F. Goodrich liked the z-z-zip sound they made and coined the term zipper.

In the 1930’s, a sales campaign began for children’s clothing featuring zippers. In 1937 the zipper beat the button in the “Battle of the Fly” when French fashion designers raved over zippers in men’s trousers. The next big boost for the zipper came when zippers could open on both ends, as on jackets. Today the zipper is everywhere, in clothing, luggage, leather goods and countless other objects meeting the needs of consumers, all thanks to the early efforts of these famous zipper inventors. 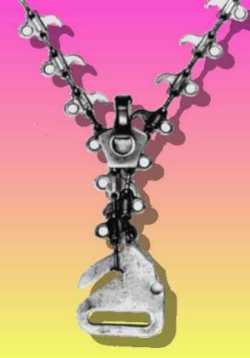 Some materials were taken from inventors.about.com, askandyaboutclothes.com and earthdude1.tripod.com/zippers. For more information please refer to those sites.